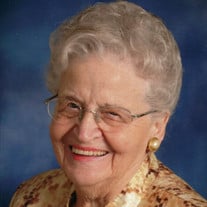 Agnes E. Turk (Turkovich), 98, was born in Helena, Montana to John and Agnes Shega (both deceased) and moved to Cleveland, Ohio at an early age. She graduated from John Hay High School in 1940 and began working in the Cleveland area. In 1943 she was married to Frank Turk (Turkovich) until his death in 1986. Agnes and Frank had two daughters, Karen and Barbara. A lifelong volunteer, Agnes began volunteering during World War II at age 19 serving as a member of the disaster team in her area and at the USO. She became a member of the local and Ohio PTA and held various positions including President. Once her family moved to Euclid, she began working for the Cleveland Trust Company (now KeyBank) in downtown Cleveland, working her way up to supervisor and retired after 52 years. The Slovene National Benefit Society (SNPJ) was a big part of her life. She was an officer of the SNPJ Cleveland Youth Board helping to organize and direct Debutante Balls and SNPJ Handicraft Exhibits, assisted with Miss SNPJ Pageants, and helped organize an SNPJ softball team. She was an active member of SNPJ Lodge #5 Naprej and on Sundays during the summers volunteered at the SNPJ Recreation Grounds in Kirtland, Ohio. She also served on the board of the Cleveland Federation of Lodges for many years. Agnes volunteered to help reorganize the SNPJ Circle #2 Slovenian Junior Chorus. She became the Assistant Circle Director and remained so for 51 years. Though many knew her name, few ever saw her on stage. Agnes was the lady in the apron behind the scenes, organizing parents, coordinating assignments and helping from the time of set-up until well after every program. Both of her daughters were members of the Circle as well as her five grandsons. Agnes was a 30-year member of the Progressive Slovene Women of America (PSWA) serving for 10 years as president of PSWA Circle 2 and was a member of the PSWA National Board. Agnes volunteered at the Slovene Home for the Aged for more than 30 years, heading up the annual Christmas Tree donation program for the last several years and was still serving as a member of the Board of Trustees at the time of her death. She also served on the Board of Trustees of the Slovenian Society Home in Euclid where she once held the office of president, volunteered at The Alzheimer’s Association, Euclid Senior Center and her church. In 2008 Agnes received the Medical Mutual Bronze Award as one of the statewide Outstanding Senior Volunteers and in 2011 was named the Federation of Slovenian Homes’ Woman of the Year. In the early 1990’s Agnes’ adventurous spirit to travel was ignited and she began traveling with her new companion, Paul Hribar. She and Paul became best friends and for the next 13 years traveled the world by land, air and sea. They visited every continent on the planet except Antarctica, and in 2003 at the age of 81, she rode an elephant in Thailand. Agnes is survived by her daughters Karen Tomsic (Richard) and Barbara Elersich (Doug): five grandsons; Matthew Tomsic (Anita), Mark Tomsic (Maggie), Michael Tomsic, Martin Tomsic, Milan Tomsic (Laura Rozboril) and seven great grandchildren; Niko, Mila, Zoee, Jade, Jacob, Makenzie and Catalina. A Mass of Christian Burial will be held at Our Lady of the Lake Catholic Church, 19951 Lakeshore Boulevard in Euclid, Ohio on Thursday, June 25th at 10 A.M. followed by a private interment at All Souls Cemetery. For the safety of all, the family requests that everyone attending Mass wear a face mask and observe social distancing. No public visitation will be held. In lieu of flowers the family has requested donations in Agnes’ name to The Slovene Home for the Aged or Our Lady of the Lake Catholic Church. Živijo Slovenci!

Agnes E. Turk (Turkovich), 98, was born in Helena, Montana to John and Agnes Shega (both deceased) and moved to Cleveland, Ohio at an early age. She graduated from John Hay High School in 1940 and began working in the Cleveland area. In 1943... View Obituary & Service Information

The family of Agnes E. Turk created this Life Tributes page to make it easy to share your memories.

Send flowers to the Turk family.