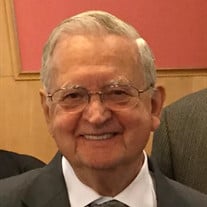 Charles L. Yohe, age 89, peacefully passed away on August 29, 2021 surrounded by his loved ones. Charles was born on September 15, 1931, in Louisville, Ohio to Wade and Doris Yohe, both deceased. Chuck was a U.S. Army Korean War Veteran. He was a parishioner of Our Lady of Mt. Carmel Church in Wickliffe, for 57 years, where he was one of its first Eucharistic Ministers. He taught in the parish school of religion and was a member of the Lake County Catholic Board of Education. He served in a variety of positions with the Wickliffe Knights of Columbus, Council #5405 and served as its Grand Knight in 1994. Chuck graduated with an accounting degree from Fenn College and developed the first computerized property accounting system for Republic Steel Corp. Chuck was a loving husband who supported his wife in all her endeavors. He was the foundation for his entire family, would do anything for his children, loved spending time with his grandchildren and participated in countless activities with them. He loved to surprise his family with creative, fun activities and his thoughtful, loving actions. He was a phenomenal gardener, master igloo builder, was an avid Cleveland sports fan, and enjoyed golfing and bowling. He was a loving husband, father, grandfather, son, uncle, and friend. He will be dearly missed. He is survived by his loving wife of 66 years, Charlene; his children, Charles Yohe, Lynne Hoopingarner, and David (Donna) Yohe; his grandchildren, David (Kenda) Yohe, Diana (Joseph) Parr, Kevin Hoopingarner, and Rachel Rogowski; his sister, Eileen Matthews; and many nieces and nephews. His son-in-law, Kevin Hoopingarner and his siblings, Janis Hackney and Delores Stoffer, preceded him in death. His Visitation will be held Friday, September 3, 2021 from 4 p.m. to 8 p.m. at Monreal Srnick Funerals & Cremations, 35400 Curtis Boulevard, Eastlake. The Funeral Mass for Charles Yohe will be held on Saturday, September 4, 2021, at 11:00 a.m. at Our Lady of Mt. Carmel Church, 29850 Euclid Avenue, Wickliffe. Burial will follow at All Souls Cemetery in Chardon Twp., Ohio.

Charles L. Yohe, age 89, peacefully passed away on August 29, 2021 surrounded by his loved ones. Charles was born on September 15, 1931, in Louisville, Ohio to Wade and Doris Yohe, both deceased. Chuck was a U.S. Army Korean War Veteran. He... View Obituary & Service Information

The family of Charles L. Yohe created this Life Tributes page to make it easy to share your memories.

Send flowers to the Yohe family.