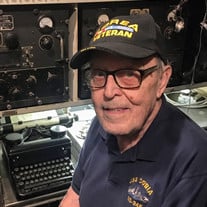 Donald A. Andrus, age 92, of Willowick, passed away peacefully on April 25, 2022, at the Burton Health Care and Rehabilitation Center. He was born in Cleveland, Ohio, on August 15, 1929. Don was preceded in death by his beloved wife of 70 years, Carole (nee Kozman); parents, George and Alice Andrus; brothers George, Jr., and Theodore Andrus; and sister, Caroline Johnson. Don was a devoted father and is survived by his three children, Cynthia (Dan) Deighton of Willowick, Karen (Mark) Tollafield of Kent, and Don (Kathleen) Andrus of Willowick. He was the loving grandfather of Andrea Deighton, Kevin Deighton, Amy Tollafield (Luke Carpenter), Jeff (Nicole) Tollafield, Don, Matthew, and Maggie Andrus; and great-grandfather to Bennett and Henry Tollafield. Don was proud of his service in the U.S. Navy from 1948-1953. During that time, he served on two submarines: the USS Cobia, and was part of the commissioning crew on the USS Trout (SS 566). Upon returning home from the service, Don worked at TAPCO, which later became TRW, retiring in 1994. He was a 65-year resident of Willowick and was an active member in both the Willowick Jay-Cees and the Indian Guides. Don is especially remembered for his patience, positive attitude, and kind and caring nature, always being there for anyone needing help. He enjoyed traveling with his family, especially to Maine and North Carolina. He became interested in woodcarving in the 1990s and enjoyed making Christmas ornaments, decorative plaques, and garden gnomes for family and friends. A short graveside service will be held on Monday, May 2, at 11:00 am at Knollwood Cemetery in Mayfield Heights. All are welcome to attend. In lieu of flowers, the family suggests donations be made in his honor to Ohio Living Hospice https://www.ohioliving.org/foundation/donate Or to the Veterans' organization of your choice.

Donald A. Andrus, age 92, of Willowick, passed away peacefully on April 25, 2022, at the Burton Health Care and Rehabilitation Center. He was born in Cleveland, Ohio, on August 15, 1929. Don was preceded in death by his beloved wife of 70 years,... View Obituary & Service Information

The family of Donald A. Andrus created this Life Tributes page to make it easy to share your memories.

Donald A. Andrus, age 92, of Willowick, passed away peacefully...

Send flowers to the Andrus family.