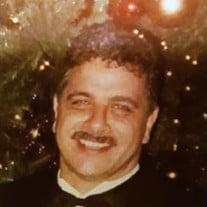 On August 17th, 2019, Edwin Michael Shiner, best husband, father, and papa, a family could ask for went to Heaven at the age of 62. Edwin was born on September 19th, 1956, in Cleveland, to Arthur and Irene (Shamblin) Shiner. He graduated from Lake Catholic in 1974 and was their first wrestling sectional champion. He attended Hondros College where he received his Residential Real Estate Appraisal Certification. On February 14th, 1976, he married Roxanne and they raised two daughters. Ed worked at ArcelorMittal Steel for 42 years as a first-class pipefitter, world class manufacturing instructor, shop steward, and Secretary of the Grievance Committee. He was a former Committeeman in Eastlake, he was a member of the Loyal Order of the Moose, and President of North Coast Sensations baton group. Ed coached softball, wrestling, and football for many years. He was an amazing friend and role model, he led by example. Ed loved his family fiercely and cherished their times together at Disney. His greatest epithet was being a positive influence on others by providing advice, guidance, support, wisdom, and loving kindness. Ed had a passion for knowledge, and loved music, karaoke, camping and taking trips to China. He was known for his quick wit and those beautiful and striking blue eyes. Edwin is survived by his wife of 43 years, Roxanne (Blank), mother Irene Shiner, daughters Brandy and Windy Shiner, grandchildren Andrea, Michael, Amanda, Aidan, Addison and Winter, siblings Robert (Pat) Shiner, Helen (Lee) Eitutis, Robin (Tom) Alborn, and Kally Shiner Nunes, mother-in-law Jean Blank. He was the favorite uncle of Art Jr., Andy, Allie, Olivia, Kalina, Michael, Kalidia, Olivia, Rocco, and Aggie. He also leaves behind many cousins, friends, and in-laws. He was preceded in death by his father Arthur G. Shiner, brother Arthur R. Shiner Sr., father-in-law Robert Blank, and his beautiful Beagle, Cookie on July 21, 2019. Visitation will be on Sunday, August 25, 2019 from 1 to 7pm at the Monreal Funeral Home, 35400 Curtis Blvd., Eastlake. Prayers of Incense will be held at 7pm. A Funeral Mass will be held on Monday, August 26, 2019 at 10am at St. Maron Church, 1245 Carnegie Ave. Cleveland, Ohio 44115. Please meet at church. Interment to follow at Western Reserve Memorial Gardens in Chesterland. For memorial contributions the family has designated the Ed Shiner "74" Scholarship fund c/o Lake Catholic HS 6733 Reynolds Road, Mentor, Oh 44060, www.lakecatholic.org.

On August 17th, 2019, Edwin Michael Shiner, best husband, father, and papa, a family could ask for went to Heaven at the age of 62. Edwin was born on September 19th, 1956, in Cleveland, to Arthur and Irene (Shamblin) Shiner. He graduated from... View Obituary & Service Information

The family of Edwin M. Shiner created this Life Tributes page to make it easy to share your memories.

Send flowers to the Shiner family.