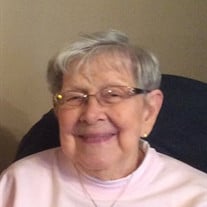 Frances Veronica Hawkins (Reese), 96, peacefully passed away on the evening of Oct. 14, 2019. She was born to Ben and Sylvia (Emmons) Reese in Alliance, OH on February 26, 1923. She grew up with 2 younger brothers, who she was proud to share were both honored war Veterans. Fran started her family in Alliance with Ken Hawkins, the love of her life, in 1942 and they were married for 64 years. They moved to Warren where they spent 40 years. They were both members of the First Presbyterian Church and passionate about bowling and OH sports. (They even went to an Indians game on their honeymoon!) Fran was inducted into the Warren Women’s Bowling Hall of Fame in 1987 and awarded Ohio State Junior Bowling Coach of the Year in 2001. She joined Facebook at age 91 to stay connected and continue to learn. She had a grateful heart, a compassionate spirt and touched the lives of many. Service, support and hard work filled her years along with many smiles and fun times. Fran was a loving wife, mother, grandmother, great grandmother, daughter, sister, aunt and friend. A gift to all, she will be dearly missed. Fran is survived by her children, Benjamin (Julie Mast) Hawkins and Rebecca (Michael Caso) Hawkins as well as her grandchildren Julie Szekely, Joetta (William) King, Tara (Jeff Fritz) Hawkins, Ben (Marciane) Hawkins and Shauna (Jason) Vaughn; her great grandchildren, Mackenzie, Zachary, Karli, Nina, Marlee and Abbey; her brother, Jesse “Jack” Reese, her daughter in law, Donna Hawkins as well as special nephews, nieces and many friends. Fran was preceded in death by her husband Kenneth Hawkins, her son Timothy Hawkins, her great grandchild Allison Frances, her daughter in law Margie, her brother Dan Reese and her sister in laws Nellie and Connie. A memorial service will be held on Saturday November 2 @ 1:00PM at the First Presbyterian Church, 256 Mahoning Ave, Warren Ohio 44483. Donations may be made to the Warren Bowling Association, please make checks to ‘WBA Youth Scholarship’ and mail to WBA 1011 Woodglen Ave Newton Falls OH 44444 or a charity of your choice.

Frances Veronica Hawkins (Reese), 96, peacefully passed away on the evening of Oct. 14, 2019. She was born to Ben and Sylvia (Emmons) Reese in Alliance, OH on February 26, 1923. She grew up with 2 younger brothers, who she was proud to share... View Obituary & Service Information

The family of Frances Veronica Hawkins created this Life Tributes page to make it easy to share your memories.

Send flowers to the Hawkins family.