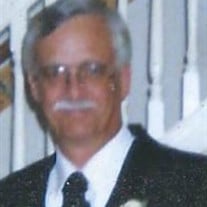 Frank “Michael” Petric, age 69, of Euclid, passed away August 15, 2019. He was born in Cleveland, on September 4, 1949, to the late Frank and Rose Petric. Frank was a proud and loving husband, father, grandfather, brother and uncle who will be greatly missed by all who knew him. He served 2 years in the Army and 10 years in the National Guard. He had a great sense of humor. Above all his greatest joy was his family, especially his grandchildren. Frank is survived by his loving and devoted wife of 33 years, Kathy Petric, children James (fiancée Nina), Todd (Sally) and Sean (Annie), grandchildren Jaime, McKenzie, Fenris, Grace and Lauren, sister Lynn (Joe), sister-in-law Vicki (Frank), nieces Lisa (fiancé Eric), Lisa (Doug), Melissa (Jon) and nephew Joseph (Jenny) and his four-legged companion, Max and dear friend, Richie. He was preceded in death by mother-in-law, Marie Shamp. A Funeral Mass will be held on Thursday, August 22, 2019 at 10am at Ss Robert and William Catholic Church, 367 E 260th St, Euclid. Arrangements entrusted to Monreal Funeral Home.

The family of Frank M. Petric created this Life Tributes page to make it easy to share your memories.

Send flowers to the Petric family.