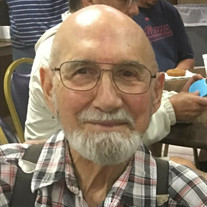 Gerald “Jerry” Miller, age 85, of Cleveland, passed away January 16, 2021. He was born in Cleveland, on October 22, 1935, to the late Gus and Marie Miller (nee Hornyak). He was a proud and loving father, grandfather, and friend who will be greatly missed by all who knew him. Jerry proudly retired form Cleveland Clinic after 20 years of dedicated service. He also taught IT at Lakeland Community College for 25 years and worked 10 years at Eaton Corp. He was a friend of Bill W. for over 56 years. His greatest joy and source of pride was his family, especially his grandchildren. Jerry is survived by his children Phyllis (Joseph) Vencius, James Miller, Morna (Tom) Konitsky, Gigi (Scott) Hoover and Peter (Kim) Miller, grandchildren, Brynn Miller, Abigail Hoover, Camden Miller, Nicholas Hoover, and Gus Konitsky. He was preceded in death by his loving and devoted wife of 60 years, Margaret Miller (nee Ward). A Funeral Mass will be held on Saturday, February 6, 2021 at 9:30am at St. John Vianney Church, 7575 Bellflower Rd, Mentor. In memory of Jerry, memorial contributions may be made to the Alzheimer’s Association.

The family of Gerald "Jerry" Miller created this Life Tributes page to make it easy to share your memories.

Send flowers to the Miller family.