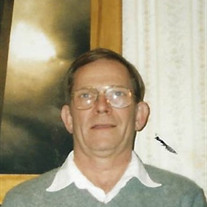 Henry “Edgar” Jenkins, 86, was born on February 14, 1934, in Somerset, Pennsylvania, to Orel and Lettie (Spears) Jenkins. Edgar served in the United States Army during his service he was station in Tripoli, Libya. He married Beverly (Friend) Jenkins in 1956. Edgar passed on September 6, 2020, in Willoughby, Ohio. Edgar was preceded in death by his father Orel, mother Lettie, his wife Beverly, his siblings Ednamae, Charles, Paul, and Linda. Edgar is survived by his siblings Wendell, Rick, and Orel Jenkins, and Michele Boucher. His three daughters Donna (Mike) Arnold, Patty Jenkins, Debbie (Mike) Rydzinski, and his three sons Donald (Shelley) Jenkins, Ronald (Hallie) Jenkins, and Mark Jenkins. His grandchildren are Adam, Britni, Carri, Michelle, Emily, Tyler, James, Beverly, and Jessica. Edgar also had two great-grandchildren Delilah and Ra’Nay. Edgar had a passion for automobiles, working with his hands, and woodworking. He was a simple man who enjoyed taking his MG to local car shows, camping, and traveling. He loved spending time with all of his children and sharing his passions with them. Also, he had an obsession with sweets. His eyes would light up over the thought of an apple pie, can of soda, or any other delicious, sweet treat at family functions. Visitation will be on Thursday, September 10, 2020 from 4 to 7pm at Monreal Srnick Funeral Home, 35400 Curtis Blvd, Eastlake. All are welcome to attend and celebrate Edgar’s life. We want to give a heartfelt thanks to all of his caregivers. In lieu of flowers the family requests a donation be made to Alzheimer's Foundation of America in Edgar’s name.

Henry &#8220;Edgar&#8221; Jenkins, 86, was born on February 14, 1934, in Somerset, Pennsylvania, to Orel and Lettie (Spears) Jenkins. Edgar served in the United States Army during his service he was station in Tripoli, Libya. He married Beverly... View Obituary & Service Information

The family of Henry E. Jenkins created this Life Tributes page to make it easy to share your memories.

Send flowers to the Jenkins family.