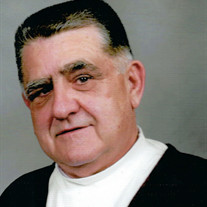 Henry Albert Kmieciak “Coach K or Mr. K”, age 80, formerly of Willowick, OH passed away Friday, March 29, 2019. Henry grew up in Emeigh Run, PA, where he spent his rascally youth hunting, fishing, and playing baseball and football. Winner of his high school Bausch & Lomb Science award. He then moved to Cleveland, Ohio to attend College and co-op’d at Republic Steel. He was an active member of Immaculate Conception Church (Cleveland, Ohio). Henry’s talents and hobbies were many. He was an extremely accomplished Engineer with a Master’s degree in Metallurgy (Graduate of Fenn College (now Cleveland State) and Case Western Reserve University), previously worked at TRW and past owner of an off-set press printing company. He loved to garden and would often donate his produce to his church and to everyone else whom he knew. Henry tutored students in math/science at Lakeland Community College, he was also a high school teacher at St. Peter Channel in Bedford, Oh and St. Edwards in Lakewood, OH. He also was a lab technician at Chemical Solvents in Cleveland, OH. He coached softball, soccer, basketball, track, and football for various leagues and schools. He was the founder of the Willowick Soccer League. Henry was a beloved husband to Donna for 54 wonderful years, grandfather, of Alex and Jacob. Father to Henry of Oakridge, TN, and John of Suffolk, VA, and father-in-law of Angela of Suffolk, VA. Preceded in death by his grandparents Albert and Elizabeth Myers of Emeigh Run, PA; His mother, Grace, and his stepfather, John; and grandchild Anthony. His only surviving relatives (Myers) are his Uncles Gilbert & Albert and Aunt Teresa. Funeral services will be held at Monreal Funeral Home (35400 Curtis Blvd. Eastlake, Ohio) on Wednesday, April 3, promptly at 5PM, with Rev. Frank. G. Godic officiating.

The family of Henry Albert Kmieciak, Sr. created this Life Tributes page to make it easy to share your memories.

Send flowers to the Kmieciak family.