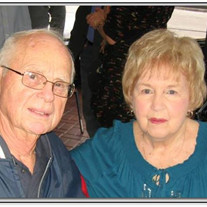 Hugh Barrett, CLU, age 85, of Wickliffe, passed away peacefully at home, surrounded by his family on February 3, 2021. He was born in Cleveland, on December 31, 1935.  He was a devoted and loving husband, father, grandfather, and great-grandfather, who will be greatly missed by all who knew him. Hugh enjoyed being involved in several charitable organizations for many years such as Deepwood, West-Lake County Exchange Club, Big Brothers Big Sisters, and oversees medical missions, especially the Philippines. Over the years he received many accolades for his charity work. Hugh was an avid outdoorsman, enjoying hunting and fishing. He enjoyed traveling to different fishing spots around the country.  He was inducted in the Cleveland Central Catholic Hall of Fame for Basketball during his HS career his team was in the state championship all four years.  Hugh is survived by his children Michael Barrett, Bob (Marilyn) Barrett, and John Barrett, grandchildren Mark (Denise) Barrett, Angela (Chris) McManis, Shauna (Matt) Sweeney, Donnie Barrett, and Sherri Barrett, great-grandchildren Skylar, Scarlett, Henry, Cole, Ailish, Rhylie, and Giovanni, sister Patsy (Corky) Farro. He also leaves behind a host of nieces, nephews, and cousins.  He was preceded in death by his wife of 65 years, Elaine, grandson Ian Barrett, daughter-in-law Janet Barrett, brother Donald Barrett, mom Christine Barrett (Souhrada).  Visitation will be on Tuesday, February 9, 2021 from 4 to 7pm at Monreal Srnick Funeral Home, 35400 Curtis Blvd., Eastlake. A Funeral Service will follow at 7pm. In lieu of flowers, donations in honor of Hugh can be made to a charity of your choice.

Hugh Barrett, CLU, age 85, of Wickliffe, passed away peacefully at home, surrounded by his family on February 3, 2021. He was born in Cleveland, on December 31, 1935.  He was a devoted and loving husband, father, grandfather, and great-grandfather,... View Obituary & Service Information

The family of Hugh Barrett created this Life Tributes page to make it easy to share your memories.

Send flowers to the Barrett family.