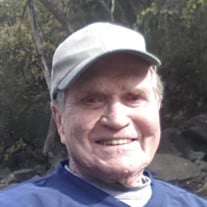 James Clayton McBride, age 81, of Euclid, Ohio, passed away peacefully on December 20, 2019 surrounded by family and friends. He was born in Cleveland, on May 29, 1938, to the late Edward and Marion McBride. Jim was a proud US Marine Veteran. He was a devoted Catholic and had a deep faith. He had 39 years of sobriety in Alcoholics Anonymous, where he helped many and was of service with whom he came in contact. He was a homegroup member at Stella Maris Group on Saturday evenings, where he made sure the hand of AA was there for anyone asking for help. Jim was a model train hobbyist for many years and enjoyed fishing with his son in Canada and New York. Jim had a great sense of humor and was very personable and outgoing. Always supporting and helpful. He was a proud and loving husband, father, grandfather, stepfather, son, brother, uncle and friend, who will be greatly missed. Jim is survived by his loving wife, Penny McBride, his children, David (Lisa) McBride and Suzanne Kotoch, step children, Bill Forsberg and Eric (Catherine) Forsberg, his grandchildren, Eryn and Rylee McBride, Anissa, Sydney and Rachael Kotoch, Kayla, Emily and Bill Forsberg, his siblings, Mary (John) Moore, Kathy (Bob) Marinelli and Eddy (Terri) McBride He was preceded in death by his son, Kevin and his brother, Timothy McBride. Private burial in All Souls Cemetery, Chardon Twp. at a later date. A Funeral Mass will be held on Monday, December 30, 2019 at 10 am at St. Robert and William Church, 367 E. 260 St., Euclid. Visitation will be on Sunday, December 29, 2019 from 1-5 pm at the Monreal Funeral Home, 35400 Curtis Blvd., Eastlake

James Clayton McBride, age 81, of Euclid, Ohio, passed away peacefully on December 20, 2019 surrounded by family and friends. He was born in Cleveland, on May 29, 1938, to the late Edward and Marion McBride. Jim was a proud US Marine Veteran.... View Obituary & Service Information

The family of James Clayton McBride created this Life Tributes page to make it easy to share your memories.

Send flowers to the McBride family.