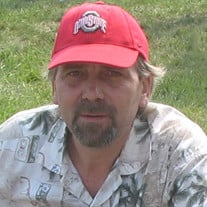 James Eric Nejedlik, age 62, passed away surrounded by family on August 2nd, 2019. He was born in Cleveland to James F. and Betty M. Nejedlik (Komora), both deceased. Jim had a 20-year career with Swagelok Company where he moved up through hard work from a machinist to manager of a welding department he created himself. His last 14 years were spent as a licensed insurance agent at Progressive Company. He was a loving husband, and the proud father of two sons, spending several years coaching little league, becoming tournament director and commissioner of the league. He had a wonderful talent for music, playing guitar, alto saxophone, and piano, and wrote and recorded his own songs. He loved the ocean and vacationing on Sunset Beach Island in North Carolina, and had a vegetable garden that was the envy of all the neighbors. He developed a passion for cooking and enjoyed playing with recipes and plate presentation. He loved his dogs, and enjoyed golfing. He was also a die-hard fan of the Cleveland Browns, The Ohio State Buckeyes, and The Rolling Stones. The last 10 years Jim was active in AA and developed a strong support system in that community. Jim was intelligent, charming, and well-loved. He was truly a rock to his family while his children were growing up. His loss is immeasurable. Jim is survived by his wife of 41 years, Janet Nejedlik (Lutheran); his sons Michael (Laura) and Adam (Jessica) Nejedlik; his grandchildren Jaxon, Irelyn, Haley, and Alexa; brothers Jeff and David (Karen) Nejedlik. Jim was also preceded in death by his sister, Denise Nejedlik. In lieu of flowers, the family suggests bringing a warm blanket to donate to his AA homegroup, who will distribute them to the homeless at Christmas time. Jim’s visitation will be held Saturday, August 17th from 10 am-12 noon, followed by a short memorial service and luncheon, at Monreal Funeral Home, 35400 Curtis Blvd., Eastlake, OH 44095.

James Eric Nejedlik, age 62, passed away surrounded by family on August 2nd, 2019. He was born in Cleveland to James F. and Betty M. Nejedlik (Komora), both deceased. Jim had a 20-year career with Swagelok Company where he moved up through... View Obituary & Service Information

The family of James E. Nejedlik created this Life Tributes page to make it easy to share your memories.

Send flowers to the Nejedlik family.