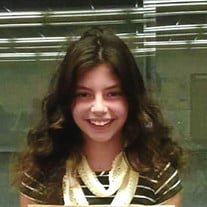 Jelena Grmaca, age 14, of Willowick, passed away peacefully at home surrounded by her family on March 19, 2022. She was born in Painesville, on September 28, 2007. She was a cherished and loving daughter, sister, granddaughter, niece, cousin, and friend who will be deeply missed by all who knew her. Jelena was a freshman at Eastlake North HS where she excelled as a student and at Volleyball. Jelena had a contagious smile and a joyous heart. In her free time, she enjoyed playing video games with her friends. Jelena was a selfless soul that enjoyed bringing happiness to others, above all else. Her greatest joy was her family especially her brother and sister, whom she adored. She will be fondly remembered for her sense of style and quick wit. Jelena is survived by her parents Danijela and Miro Grmaca, her sister Katarina Grmaca and brother Luka Grmaca, maternal grandparents Ilija and Kata Romic, paternal grandmother Jelka Grmaca, aunts Ivana (Edward) Crnjac, Zora (Branko) Marcic, Mira (Ranko) Maletic, Svjetlana (Anto) Dordic, and Snjezana Zadravec, uncles Danijel (Ksenia) Romic and Zoron (Tina) Grmaca. Jelena also leaves behind a host of dear cousins and friends along with her beloved dog, Ozzy. She was preceded in death by her paternal grandfather Anton Grmaca. Visitation will be on Wednesday, March 23, 2022, from 4 to 8pm the Monreal Funeral Home, 35400 Curtis Blvd., Eastlake. A Funeral Mass will be held on Thursday, March 24, 2022, at 10am at St. Paul Croatian Church, 1369 E 40th St, Cleveland. Jelena will be laid to rest at All Souls Cemetery in Chardon, OH.

Jelena Grmaca, age 14, of Willowick, passed away peacefully at home surrounded by her family on March 19, 2022. She was born in Painesville, on September 28, 2007. She was a cherished and loving daughter, sister, granddaughter, niece, cousin,... View Obituary & Service Information

The family of Jelena Grmaca created this Life Tributes page to make it easy to share your memories.

Jelena Grmaca, age 14, of Willowick, passed away peacefully at...

Send flowers to the Grmaca family.