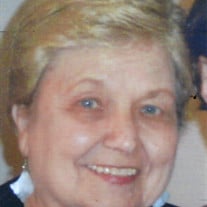 Joanne Marie Veneskey, (Nee Nolan) passed away peacefully in her sleep on Wednesday, January 27, 2021 at Heather Hill Nursing Home in Chardon with her husband at her side. Joanne was born on December 15, 1933 in Cleveland, to James P. & Gertrude Nolan. Joanne graduated from Collinwood High School in 1951 and married her high school sweetheart, Don Veneskey in May of 1952. She worked at the White Motor Co. until 1955 when their first son, Donald Craig was born. The Veneskey’s moved into their home in Willowick in May of 1958, and never moved again. Their second son, John Edward, was born in 1963. Joanne worked at Cardinal Federal Bank in Mentor, (Now 5/3 Bank), for (20) years as a teller, and later as a Financial Advisor until retiring in 1993. Joanne owned and operated two craft businesses from 1989-2011. (Joanne’s Custom Quilting, and Joanne’s Wearable Arts And Hand Knits, (JOWAHK). She did beautiful work, and thoroughly enjoyed what she did. Joanne was the happiest, when at Christmas time each year, (for over half a century), she would spend several weeks preparing for her annual Christmas open house. The entire family would get together and everyone would go home with leftovers and one of her “famous” home made pizzas!! Joanne was a person who never had a bad word to say about anyone. She has suffered from several serious illnesses over the past few years, and spent many months in hospital rooms and nursing homes. Joanne is proceded in death by her parents; her sister Jeanette Donovan; and her brother James E. Nolan. Joanne leaves behind her husband Don, of 68 years, her two sons, Don (Cindy) Veneskey and John (Sharon) Veneskey; nine grandchildren, Jessica (Doug) Linley, Dena Veneskey, Matt (Katie) Veneskey, Mike Veneskey, Elizabeth Veneskey, Daniel Veneskey, & Emma Vickers; two great-grandchildren, Isaac and Elliot Linley, and one on the way, (Matt & Katie Veneskey). She is also survived by her sister-in-law Lucille Nolan; special niece Patricia Toth; nephews James, Michael, and Robert Nolan; niece Kathleen Twyman, and their families. A private visitation will be held on Wednesday, February 3, 2021 from 2 to 4pm. A Celebration of Joanne’s Life will be held at a later date. Arrangements have been entrusted to Monreal Srnick Funerals & Cremations.

Joanne Marie Veneskey, (Nee Nolan) passed away peacefully in her sleep on Wednesday, January 27, 2021 at Heather Hill Nursing Home in Chardon with her husband at her side. Joanne was born on December 15, 1933 in Cleveland, to James P. & Gertrude... View Obituary & Service Information

The family of Joanne M. Veneskey created this Life Tributes page to make it easy to share your memories.

Send flowers to the Veneskey family.