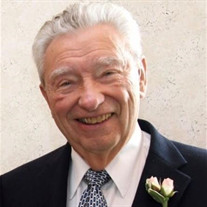 John H. Schuller, 87, of Spring Hill, FL., passed away July 28, 2019 after a short battle with cancer. He was born in Dubuque, Iowa on April 17, 1932. John graduated from Loras Military Academy and received his BS Degree from Fenn College/Cleveland State University. He was married to Janet Ayala Schuller on January 24, 2004. John worked/had a 40 year career in Transportation for National Castings Corporation. He served in the Iowa National Guard and US Army as an artillery instructor during the Korean War. He was a member of St. Francis Cabrini Roman Catholic Church in Spring Hill. John had a passion for golf, bowling and spending time with his children, grandchildren and great grandchildren. He was a selfless, generous, kind and caring man. He routinely put others before himself even throughout his illness. Those that knew John would say he always had a smile on his face and an encouraging word to offer. He was preceded in death by his loving wife of 36 years and mother of his children, Charlotte Barclay Schuller and his parents John G Schuller, Ruth M. and Kenneth Weitz. He was survived by his wife, Janet Ayala Schuller and children whom he loved dearly, Janet Schuller Williams, Jack (Wanda) Schuller, Sandra Schuller, Pamela (Linda) Schuller Bernadella and step-daughter Brandy (Alex) Potavin-Figueroa; sister Mary Lou Merritt, brothers Ken (Joan) Weitz and Thomas (Charlotte) Schuller; grandchildren John (Jana) Schuller, Justin (Autumn) Schuller, Christopher Williams, Jennifer Williams, Kasey Bernadella, Xavier and Kassandra Figueroa; great grandchildren Isabella, Hayden, Charlotte and Jordan. Friends and family to gather on Friday, August 16, 2019 from 4 to 8pm at the Monreal Funeral Home, 35400 Curtis Blvd., Eastlake, OH 44095. Mass of Christian Burial will be 10:30am on Saturday, August 17, 2019 at St. Mary Magdalene Church, 32114 Vine St, Willowick, OH 44095. Inurnment will take place at All Souls Cemetery in Chardon, Ohio. To leave an online condolence to the family, please visit our website at www.monreal.com.

John H. Schuller, 87, of Spring Hill, FL., passed away July 28, 2019 after a short battle with cancer. He was born in Dubuque, Iowa on April 17, 1932. John graduated from Loras Military Academy and received his BS Degree from Fenn College/Cleveland... View Obituary & Service Information

The family of John H. Schuller created this Life Tributes page to make it easy to share your memories.

Send flowers to the Schuller family.