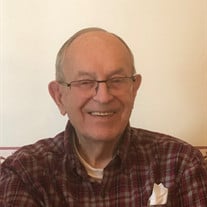 John J. Yagoda Sr., age 86, of Willowick, passed away peacefully on May 12, 2021. He was born in Lilly, PA, on August 28, 1934, to the late Walter and Blanche Yagoda (nee Krawick). He was a devoted and loving husband, father, grandfather, brother, uncle, and friend, who will be greatly missed by all who knew him. John proudly served in the US Marines. He went on to graduate from Penn State University. After 42 years of dedicated service, he retired from Bailey Controls in Wickliffe. He was an avid Pittsburgh Steelers' fan. John brought joy and happiness to many children and families as Santa Claus for over 30 years. John is survived by his wife of 61 years, Lucille Yagoda (nee Myers), children Sharon (Eugene) Vasilevicius, Marlene (Michael) Seifert, John (Terese D'Amico) Yagoda Jr., Mary Beth (Alan) Wagner, grandchildren Michael (Leah Myers) Seifert, Zachary Seifert and John Seifert, brothers Barry (Cathie) Yagoda, and Ronald (Lyla) Yagoda. He also leaves behind a host of nieces, nephews and adopted grandchildren Jonathan, Annie, Grace, Maggie, AJ, and Avery. He was also preceded in death by sister Helen Giblock and brother Billy Yagoda. Visitation will be on Sunday, May 16, 2021 from 4 to 7pm at Monreal Srnick Funeral Home, 35400 Curtis Blvd., Eastlake. A Funeral Mass will be held on Monday, May 17, 2021 at 11am at St. Mary Magdalene Church, 32114 Vine St, Willowick, please meet at the funeral home at 10am for a procession. A private burial will be held at a later date in the Ohio Western Reserve National Cemetery, Rittman Ohio. In lieu of flowers, donations in honor of John can be made to Ursuline Sisters of Cleveland, 29777 Fairmount Blvd, Pepperpike OH 44124.

John J. Yagoda Sr., age 86, of Willowick, passed away peacefully on May 12, 2021. He was born in Lilly, PA, on August 28, 1934, to the late Walter and Blanche Yagoda (nee Krawick). He was a devoted and loving husband, father, grandfather,... View Obituary & Service Information

The family of John J. Yagoda created this Life Tributes page to make it easy to share your memories.

Send flowers to the Yagoda family.