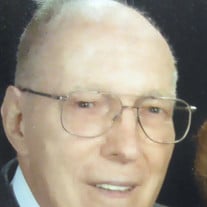 Memorial Mass for Joseph P. Negrelli, age 94, of Mentor, will be held at St. John Vianney Church, 7575 Bellflower Road, Mentor. He peacefully passed away on Monday, March 7, 2022, at Salida Woods Assisted Living where he had resided for the past seven years. Born July 3, 1927, in Cleveland, he has been a resident of Lake County for over 60 years, having lived in Willowick, Eastlake and Mentor. His children fondly recall his work bench in the family's basement where he could fix anything. Joseph graduated from Collinwood High School in 1946 and attended Fenn College (now Cleveland State University). He was Veteran of the U.S. Army serving in the 24th Infantry Division in the occupation of Japan and fought in the defense of South Korea where he was awarded the Bronze Star Medal for meritorious service and the Korean Service Medal with five battle stars. It was in Japan that Joseph met and married his wife, Kumiko. Joseph worked for over 33 years in the electrical construction industry retiring after 23 years as Contract Manager with The Lake Erie Electric Company. He oversaw many challenging projects including projects at the CEI power plants in Cleveland and Eastlake, the Perry Nuclear Power Plant, the Chevrolet and Ford Plants in the Cleveland area, Republic Steel Corp. BOF in Cleveland, Lakeland Community College, Cleveland Hopkins Airport, Ohio State prison in Mansfield, Ashtabula Hospital EPA upgrade, coal conveyor-stacker at the Conrail coal dock in Ashtabula, and Disney World Hotels in Orlando, Florida. Joseph was a proud member of the Willowick-Eastlake American Legion Post 0678 and the 24th Infantry Division Association. He was a third-degree member of the Knights of Columbus. While a resident of Willowick, he served on the Planning Commission, and he enjoyed being a member of the Cleveland Area Retired Persons (C.A.R.P.). Joseph leaves behind children David J. (Liliam), Edward P. (Maureen), Margaret "Peggy" (Paul) Sklad and Kathryn K.; grandchildren Michael Sklad, Erica (Kenny) Haber, Christina (Joel) Rodriguez, Maureen "Nickie" (Clay) Coomer, Kara (Robert) Boyle, Joseph B. (Naveed) Negrelli and Tracey (Alex) Harris; 8 great-grandchildren; brother William E. (Virginia) Negrelli; nieces and nephews. He was preceded in death by his wife, Kumiko in 2019, parents Joseph and Marguerite (Smyth) Negrelli, brother Thomas J. and sister-in-law Audrey Negrelli. Family and friends, please meet at St. John Vianney a half hour prior to mass. Funeral Mass at 9:30am Saturday, March 19, 2022, at 7575 Bellflower Rd in Mentor, Ohio. Burial of his cremains will follow at Knollwood Cemetery, 1678 Som Center Road, Mayfield Hts. In lieu of flowers, contributions in Joseph's memory may be made to a charity of your choice or the American Heart Association.

Memorial Mass for Joseph P. Negrelli, age 94, of Mentor, will be held at St. John Vianney Church, 7575 Bellflower Road, Mentor. He peacefully passed away on Monday, March 7, 2022, at Salida Woods Assisted Living where he had resided for the... View Obituary & Service Information

The family of Joseph P. Negrelli created this Life Tributes page to make it easy to share your memories.

Memorial Mass for Joseph P. Negrelli, age 94, of Mentor, will...

Customized sympathy cards. Mailed for you.