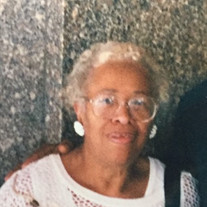 Lucille A Cooper. (Better known as Lucy) was born January 24, 1930 to Samuel W Fisher, and Mindola Fisher in Cleveland, Ohio. She departed this life February 18, 2020. She lived in Cleveland, her entire life and attended The Cleveland public school system, attending Bolton Elementary School, Rawlings Junior High School, and graduated from John Hay Night School. She met her husband Bert Cooper at John Hay. She also attended Cuyahoga Community College and received an Associate degree in Business Administration. Lucille was employed with the United States Navy for many years and then transitioned over to the Veteran Administration where she stayed until retirement. She had many hobbies; she loved to read, work puzzles, travel, collected turtles and miniature pianos. She also collected match books and magnets from all of the places that she had visited. She loved to watch Judge Judy, police stories and sporting events. One of her highlights was going to the Rose Bowl to watch her favorite team the Ohio State Buckeyes. She was a skilled artist, and at one time considered going into fashion design at Northwestern University. Lucille dreamed of one day becoming a policewoman but due to poor eyesight she could not accomplish that goal. She was a member of the American Bridge Association for over forty years and was an avid bridge player. She attended bridge tournaments all over the continental USA and won numerous trophies and points. She was also a member of several community organizations. She was preceded in death by her parents and Husband Bert Cooper, a sister Zelma Mae Chapman (Lawrence & Carol), and brothers Samuel W. Fisher (Thelma) and Charles Andrew Fisher (Dorothy). Lucille leaves to cherish her memory: a sister Doris Ivey, a son Bruce Cooper and his wife Robin, grandchildren; Bruce Jr, Ryan, Chelsea & Jacob Bartling, one great grandchild Lyndon Moffett Cooper, and her mother Stephanie. Nieces and nephews (Lawrence & Carol deceased) Twin nieces Anita Stubbs and Annetta Fisher, nieces Gloria Chapman, Andrea Fisher, Alicia Ivey, Adrienne Ivey, Adel Ivey, Nephews James Carr, Joseph Carr, Courtney Fisher, Daniel Ivey, William Fisher, and Derrick Ivey; a sister in law Dorothy Fisher, cousin Willard Jackson numerous great nieces nephews, second cousins, and a host of relatives, friends, and family. She lovingly referred to her nieces Anita and Annetta as her daughters, Gloria, Eliese & Monica as her little daughters and James as her other son. Sorrowfully submitted The Family

Lucille A Cooper. (Better known as Lucy) was born January 24, 1930 to Samuel W Fisher, and Mindola Fisher in Cleveland, Ohio. She departed this life February 18, 2020. She lived in Cleveland, her entire life and attended The Cleveland public... View Obituary & Service Information

The family of Lucille A. Cooper created this Life Tributes page to make it easy to share your memories.

Lucille A Cooper. (Better known as Lucy) was born January 24,...

Send flowers to the Cooper family.