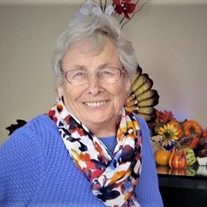 Mary Ann Terlep (nee Harting), age 91. Born February 26, 1929 in Cleveland, OH – passed away peacefully on September 21, 2020. Beloved wife to the late John Terlep. Loving mother of Mark (Marcia), Leslie DiVincenzo (Kenny), Debbie Dorsch (Ken), Robert James (Ivany). Beloved grandmother of Chad and Courtney DiVincenzo, Carrie Boggs (Dalton), Sam Dorsch and Gabriel Alcaide Goncalves (Morgana). Dearest daughter of the late Anthony and Veronica Harting, and daughter-in-law of the late John and Mary Terlep. Devoted sister of Delores Voelker (William deceased). She is survived by numerous nieces, nephews, cousins, and many friends. Mary Ann was married to her late husband John for 59 years, during which time she was a devoted wife, mother, homemaker and more. She was well loved throughout her lifetime. She was kind and thoughtful, traits which she passed on to her children and grandchildren through her teachings and actions. She was the life of the party – always laughing, joking and dancing her way through life. She will ever be remembered fondly, by all who knew her, for her vivacious personality and her ability to make anyone smile. Suggested memorial contributions in memory of Mary Ann to Hospice of the Western Reserve, P.O. Box 72101, Cleveland, OH 44192. Visitation will be on Friday, September 25, 2020 from 3pm to 6pm at Monreal Srnick Funeral Home, 35400 Curtis Blvd, Eastlake. A Funeral Service will be held also at the Funeral Home on Saturday, September 26, 2020 at 10am. Interment to follow at All Souls Cemetery in Chardon.

The family of Mary Ann Terlep created this Life Tributes page to make it easy to share your memories.

Send flowers to the Terlep family.