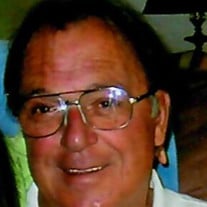 Norman Marolt, age 75, peacefully passed away on April 18, 2021. He was born in Cleveland, OH on June 15, 1945 to Anthony and Marvelle Marolt (both Deceased). Norm was a 1963 Euclid graduate. He was married to Rose his beloved wife in 1968. They raised their family in Euclid, before retiring to Las Vegas in 1998. They were married 40 years before she passed away in 2008. Then Norm returned to Ohio. Norm was a proud U.S. Navy Veteran, where he was part of the Construction Battalion, better known as the SeaBees. His love for racing started in the 1970's by participating in demolition derbies, where he known as "Stormin Norman". Norm was a huge Nascar Fan, talented in building race cars and was on many pit crews over the years. He was an avid poker player and enjoyed a good Texas Hold Em tournament. He was a dedicated friend, who met with his group of friends every Saturday at Adams in Euclid. He was loving and caring and a straight shooter type of guy, who was the life of the party. He was a loving husband, father, grandfather, son, uncle, companion and friend, who will be missed. He is survived by his loving children, Tina (Robert) Roeder and Buddy Marolt, his grandchildren, Natalie, Holly and Shelly Roeder, his sister-in-law, Cathy (Bim) Villani, his brother-in-laws, Tony, Larry (Denise) and Robert (Sharon Benjamin) Madda, his life long best friend, Joseph (Karen) Zigman and his companion of many years, Marilyn Santillo and many nieces and nephews. He was preceded in death by his loving wife, Rose Marie Marolt (Madda). The checker flag is out, you're in first place and nobody is even close. Take you place in the winner's circle, you've earned it! Visitation will be held Thursday, April 22, 2021 from 4 PM - 7 PM at Monreal Srnick Funerals & Cremations. Services for Norman Marolt will be held on Thursday at 7:00 PM at Monreal Srnick Funerals & Cremations at Monreal Srnick Funerals & Cremations, 35400 Curtis Blvd., Eastlake. In memory of Norm, memorial contributions may be made in care of the family.

The family of Norm Marolt created this Life Tributes page to make it easy to share your memories.

Send flowers to the Marolt family.