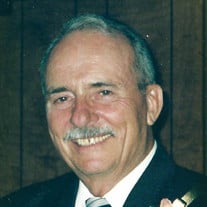 Philip S. Mattingly, age 91, of Mentor formerly of Eastlake, passed away peacefully January 5, 2021. He was born in Groves Pt., Michigan, on August 8, 1929, to the late William and Maryann Mattingly (nee Filkowski). He was a proud and loving father, grandfather, and great-grandfather, who will be greatly missed by all who knew him. His greatest joy and pride was his family. He grew the best tomatoes ever! He loved working in his garden, playing cards and dominos. He could build or repair anything he put his mind to. Phil was a man of faith and a founding member of St. Justin Martyr, where he was a long time member of The Holy Name Society. Phil was honorably discharged from the U.S. Army in 1948. Phil is survived by his children Ellen (Thomas) Liebhardt Sr., Monica Vlasz, Philip (Sheila) Mattingly, Rev. Thomas Mattingly, Jean Mattingly, John (Rachelle) Mattingly, grandchildren Thomas (Karlyn) Liebhardt Jr., Mark Liebhardt, Eric (Monica) Liebhardt, Maryann (Christopher) Hunt, John McKenney, Michael Vlasz, Daniel (Ashlee) Tomaro, Jamie Fiore, William Mattingly and Nicholas Mattingly, and 10 great-grandchildren. He had many dear friends at Parker Place. The family would like to thank them for their support and also Home Instead for their devoted, tender care. He was preceded in death by his loving wife of 61 years, Jean Mattingly (nee Janz) and his son William Mattingly. A mass of Christian Burial will be private due to Covid and will be live-streamed starting March 18, 2021 at 10:00. In lieu of flowers, donations in honor of Phil can be made to the American Cancer Society. https://www.youtube.com/channel/UCxoCMsqq0ilWWz2q0UlgieA please use this link to access the live Mass.

Philip S. Mattingly, age 91, of Mentor formerly of Eastlake, passed away peacefully January 5, 2021. He was born in Groves Pt., Michigan, on August 8, 1929, to the late William and Maryann Mattingly (nee Filkowski). He was a proud and loving... View Obituary & Service Information

The family of Philip S. Mattingly created this Life Tributes page to make it easy to share your memories.

Send flowers to the Mattingly family.