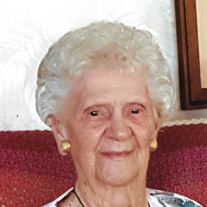 August 28, 1921 ~ February 26, 2021 Reta J. King was the daughter of the late Mr. Stuart Schinness and Edith Schinness. She was married to the late Alvin John King and had three children the late Allen Wayne King, Darlene King and Gary S. King. Reta was born in Cleveland on August 28, 1921 and passed away peacefully on February 26, 2021. Reta's son Allen W. King had preceded her in death. On September 20, 2016. She loved birds specifically canaries and had several for years. She was as tough as they come and ran a tight ship. She was a woman who had lots of class and was stylish in every way. Reta organized and ran a weekly pinochle card activity on Saturday nights at the Willoughby Community Center in which an average of seventy five members attended each week. She worked as a cashier at Fisher Fazio and because of her ability to move the cashier line so swiftly, she was nicknamed, "SMOKE". Reta was a member of the Eastlake and Willowick Senior Center where she played cards. Her hobbies included playing pinochle, bingo, corn hole games, golf, and of course she loved going to the casinos, and play her slot machines. She leaves to mourn her devoted son Gary King(Denise), her daughter Darlene Steiner(Bill), daughter-in-law Barbara, as well as her grandchildren, great-grandchildren, and a host of relatives and friends. Reta was a beautiful and compassionate woman who loved all people no matter their heart and will be truly missed. Family will receive friends on Saturday, March 6, 2021 from 12:00pm to 4:00pm at Monreal Srnick Funeral Home, 35400 Curtis Blvd, Eastlake. A Funeral Service will be held at 4:00pm at the funeral home. The family would like to thank everyone for their emotional support and would like everyone to continue to pray for us during these sad times.

The family of Reta Jane King created this Life Tributes page to make it easy to share your memories.

Reta J. King was the daughter...

Send flowers to the King family.