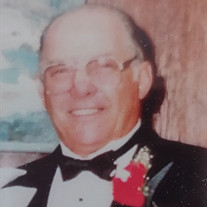 Richard ("Andy") Andrews (Bergner) Andy Andrews, 91, of Eastlake, Ohio passed away on June 4, 2022, surrounded by his family. He was born on January 26, 1931, in Cleveland, Ohio. He married Jodi Lockwood on July 6, 1962. He was a lineman for the Illuminating Company for 40 years, retiring in 1990. Andy suffered a stroke in 2006, which left him unable to communicate for the remainder of his life. During this time, he worked diligently on jigsaw puzzles, coloring, and painting. Sometimes he painted things he probably shouldn't have, like the brand-new wood privacy fence he painted pink. In 2016, through a DNA test, he discovered his paternal lineage, that being the Bergner family. He accepted this knowledge with wonder and embraced his new German heritage. He is survived by his wife Jodi of 60 years, his six daughters, Debi, Alison, Dawn (Wayne), Blake (Joe), Danielle (Jeff), and Randi (Mike), 15 grandchildren, and 17 great-grandchildren. A private memorial will be held on Saturday, June 11, 2022. Arrangements entrusted to Monreal Srnick Funeral Home.

The family of Richard J. Andrews created this Life Tributes page to make it easy to share your memories.

Send flowers to the Andrews family.