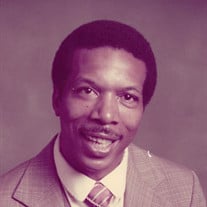 Ronald C. McGruder, age 79, peacefully passed away on January 31, 2021. Ron was born in Birmingham, AL on July 1, 1941 to Amos and Sallie (Billups) McGruder (both deceased).   Ron was a member of St. John Baptist Church for 38 years, where he served as deacon and servant. He was a member of AA since 1982, where he was instrumental in mentoring and leading others to the road of recovery. Through his good works, he, and his wife Julia, started the "New Beginnings" group which is still touching so many lives. Wickliffe Wednesday was his Homegroup since 1982. Ron initiated a sober house in Painesville over 10 years ago, which is still continuing to flourish today.  He worked for over 10 years as a Chemical Dependency Treatment Counselor after having earned an Associate of Arts degree from Lakeland Community College in 2006. He retired from Lubrizol. He was a strong mentor of truth and unselfishness directed at saving lives. He was always available to assist the Cleveland AA Central Office whenever needed. Ron was brutally but lovingly honest.  Some of Ron's infamous quotes were, "Holla at your boy" and "Rock n Roll.  He walked the walk of his beliefs with integrity. He was a servant of God and served it up with love to all people. He will always be remembered for his extraordinary “Sweet Potato Pies,” which was also the name he used on his license plate.  Ron was a loving husband, father, grandfather, great grandfather, son, brother, uncle, friend, and mentor. He will be greatly missed. Ron is survived by his loving wife of 37 years, Julia (Martin) McGruder.  Daughters, Linda (Emiel) Adams, Lezlee (Tony) Sims, Shannon McGruder.  Sons, Willie Dill and Elijah McGruder, who lovingly called him Papa.  His circle of love included nine grandchildren, seven great grandchildren, and his brother, Dennis Echoles of Alabama. Ron also leaves to mourn a host of nieces, nephews, and friends whom he regarded as no less than extended family members, Michael McPherson, Jeff Moore, and Larry McCauley. He was preceded in death by his siblings, Charlies, Prince Edward, Christine, Barbara, and Alonzo. Services will be 11 am Friday, Feb 5, 2021 at St. John's Baptist Church 361 W Jackson St., Painesville. Visitation at the church will take place one hour prior to the service. Services will be available virtually through the church. Social distancing will be adhered to as well as masks are required.  An in-person visitation and virtual visitation will be held Thursday, Feb 4 from 5-7 pm at Monreal Srnick Funerals & Cremations, 35400 Curtis Blvd., Eastlake. Virtual Visitation on Zoom at ID 620-867-2049 Password: monreal Monreal Srnick Funerals & Cremations Visitation Room Join Zoom Visitation https://us02web.zoom.us/j/6208672049?pwd=aWJveG16azZ5bFBWUDRkaCtNL3hBQT09  Meeting ID: 620 867 2049 Passcode: monreal

Ronald C. McGruder, age 79, peacefully passed away on January 31, 2021. Ron was born in Birmingham, AL on July 1, 1941 to Amos and Sallie (Billups) McGruder (both deceased).   Ron was a member of St. John Baptist Church for 38 years, where he... View Obituary & Service Information

The family of Ronald C. McGruder created this Life Tributes page to make it easy to share your memories.

Send flowers to the McGruder family.