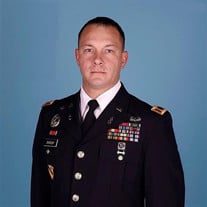 Ryan Christopher Sweesy, 40, passed away while stationed with the U.S. Army in Fort Wainwright, Alaska. Ryan is the beloved son of Denise and Andrew Thompson and Thomas and Judy Bukvic, loving father of Liam, devoted companion of Ares, brother of Megan (Derek) Moody, Thomas Bukvic, Kerry (Casey) Bossard and big brother to Jacob. Grandson of Joseph and Audrey Bukvic, Connie and Lyle Johnson (both deceased) and Jack (deceased) and Betty Barno. Doting uncle of Riley (deceased), Gianna, Daniel, Quinn, Audrey, Christopher and Amelia. Nephew, cousin and friend of so many. Ryan was born in Cleveland, Ohio where he made many friends in both the Cleveland and Ashtabula areas. He is a graduate of Harbor High School in Ashtabula. He then moved to Texas where he continued to make many friends with his amazing wit and loving personality. This is also where he decided to begin his impressive career with the Army at Fort Hood, Texas. Ryan is a Chief Warrant Officer (CW2) and decorated Combat Veteran with the United States Army. His 15 years of service include 2 deployments to Iraq and one to South Korea, as well as serving in multiple parts of the world. Ryan earned several medals including the Bronze Star, Global War on Terrorism Medal, National Defense Service Medal and many other honors and citations of which he was very proud. Ryan is a very well respected and loved friend, mentor, and “Chief” to numerous soldiers around the world. As an active member of Combat Veterans Motorcycle Association (CVMA 43-2 Alaska), Ryan was able to embody his passion for the military and his love for his Harley. Ryan established “Warranted Creations” in 2019, encompassing his amazing wood-working skills. His pride, passion and true talent resulted in several beautiful pieces which have been received by many dear friends and loved ones, as well as donated to many organizations that are near and dear to Ryan. Family will receive friends this Friday 2-8 at Monreal Funeral Home: 35400 Curtis Blvd, Eastlake Ohio. Services Saturday at 10 at Monreal Funeral Home immediately followed by burial at All Souls Cemetery in Chardon, Ohio. In lieu of flowers, family requests donations in Ryan’s memory to the following organizations: foldsofhonor.org woundedwarriorproject.org vetshelpingheroes.org.

Ryan Christopher Sweesy, 40, passed away while stationed with the U.S. Army in Fort Wainwright, Alaska. Ryan is the beloved son of Denise and Andrew Thompson and Thomas and Judy Bukvic, loving father of Liam, devoted companion of Ares, brother... View Obituary & Service Information

The family of Ryan Christopher Sweesy (Bukvic) (Thompson) created this Life Tributes page to make it easy to share your memories.

Ryan Christopher Sweesy, 40, passed away while stationed with...

Send flowers to the Sweesy family.