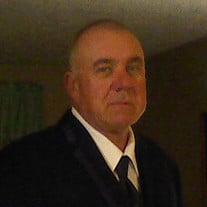 Thomas Earl (Greenie) Greenawalt, Sr. A visitation will be held at Monreal Srnick Funeral Home on Saturday, April 10, 2021 from 2 to 6pm. A Funeral Service will be held at 6pm also at the funeral home. Mr. Greenawalt will be laid to rest at All Souls Cemetery in Chardon at a later date. Mr. Greenawalt passed away peacefully on April 6, 2021 surrounded by his son and daughter. He was a former resident of New Bethlehem, PA. Born on October 11, 1952 in Kittanning, PA to Charles E. and Helen Greenawalt (nee Buhay). He lived in Eastlake, OH since 1978. He was a 1974 graduate of Clarion University of PA with a B.S. Degree in Education; he was on the Dean's List. He substitute taught for two years before moving to Ohio, after becoming frustrated with teaching job openings. He then worked his second love, working with his hands in the construction field. He worked 25 years for his father-in-law's construction company. He then worked for Ohio Paving until his retirement. He was a member of the Loyal Order of Moose and former member of the Weslaco Sports Men's Club. "Greenie" loved hunting, fishing and enjoyed telling a good brain rattling joke or story. He had an amazing memory, often remembering events back to age 3. He loved ice cold beer, colder than a mother-in-law's kiss. He also enjoyed going on many fishing trips to Canada with a great group of friends. In his retirement he loved spending time with his granddaughter, Morgan. Greenie played Little League Baseball, Connie Mack, and Slo-Pitch Softball, always batting clean-up. He was noted as a fierce power hitter, taking them "downtown" on many occasions. He had a sweeping curveball. His heroes were Babe Ruth and Mickey Mantel. Survivors are his son Thomas Earl Greenawalt, Jr. (Mary Aho), daughter Marissa Danielle Greenawalt, brothers Charles and Jeffery (Deanne), sister Karen Suriano, and granddaughter Morgan Victoria. Mr. Greenawalt was preceded in death by his parents, sister Connie, and his wife Vickey (1998) whom he loved dearly. Greenie has left the stadium.

Thomas Earl (Greenie) Greenawalt, Sr. A visitation will be held at Monreal Srnick Funeral Home on Saturday, April 10, 2021 from 2 to 6pm. A Funeral Service will be held at 6pm also at the funeral home. Mr. Greenawalt will be laid to rest at... View Obituary & Service Information

The family of Thomas Greenawalt created this Life Tributes page to make it easy to share your memories.

A visitation will be held...

Send flowers to the Greenawalt family.