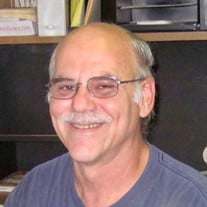 It is with profound sadness that the family of Thomas (Tom or Alvin) Lee Stull of Wickliffe share that he passed away peacefully on September 23rd, at the age of 64 following a lengthy battle with cancer. Tom was surrounded by his family, serenity of Lake Erie and tranquility of nature at the David Simpson Hospice House in Cleveland. Tom is survived by his sister, Dawn Stull and brother Herbert Stull, nephews, and nieces Wesley (Kim) Crane III, Michael Crane, Jennifer (Brian King) Stull and Travis (Katie) Stull. Cousins Betty Long, Joanne Novak, Bob (Emma) Novak, Bill Novak, Rick (Teja) Novak, Duane Glover along with many second and third cousins, 3 great nephews, and his number one supporter and rock, second cousin, Cheryl (Eric) Hunt during his battle with cancer and his final days. Most importantly all of Tom’s Pepco family. He was preceded into death by his grandparents, loving mother Joanne Stonebraker (nee Stiadle), father Herbert Lee Stull, aunts Connie Novak and Katherine Glover and cousin Charles Glover along with his grandparents and his great-grandparents. Tom was born and raised in Cleveland on Euclid Beach. Tom graduated from Collinwood HS in 1975. After graduating HS, Tom wanted the best for himself and his country, he proudly enlisted with the Unites States Army as an Engineer, he served until 1981 and then enlisted into the Army Reserve until 1991 where he was honorably discharged as a Staff Sergeant. Besides the Army, Tom loved working for Pepco. Pepco became his pride and joy in life. Tom was a faithful employee and family member to Pepco, he dedicated over 40 years. “Tom’s Tool Room” will remain intact. Cheryl would like to express if anyone needs Pepco gear please contact her at “1-800-Just Kidding”. She has never seen anyone have so many materialistic items from their place of employment. In his spare time, Tom loved building race cars and racing them and don’t forget his Chevelle and motorcycle. He also loved to help his friend Jack Borkey with building boats and refinishing houses. Tom also enjoyed playing sports (Pepco teams of course) and staying fit. He had a passion for collecting Eagle statues, oh and did we mention Pepco merchandise? Tom’s immediate family will forever miss him randomly stopping in to say, “hi.” They will also miss spending the holidays with him showing up with the same leftover plates he had from the last Holiday. The family would like to extend their gratitude to Pepco for always being there for Tom and being loyal to him as he was to you. Jim Georgian for guiding Cheryl through everything and being there for all her concerns and offering support in general. Howie Price for all your support and prayers, we know Tom found Jesus. Thank you to the staff at Seidman Cancer Center for the care they provided to Tom. Thank you, Cheryl for being so strong and remaining by Toms side as you promised to be his ROCK. Most importantly thank you, David Simpson House for providing guidance, care, and compassion through Toms end of life transmission, you are all great people with amazing hearts. Fly high soldier. Visitation will be held on Monday, September 28, 2020 from 4 to 7pm. A Funeral Service and Military Honors will follow at 7pm at Monreal Srnick Funeral Home, 35400 Curtis Blvd, Eastlake. In lieu of flowers, donations in honor of Tom can be made to the Hospice of the Western Reserve-David Simpson House.

It is with profound sadness that the family of Thomas (Tom or Alvin) Lee Stull of Wickliffe share that he passed away peacefully on September 23rd, at the age of 64 following a lengthy battle with cancer. Tom was surrounded by his family, serenity... View Obituary & Service Information

The family of Thomas Lee Stull created this Life Tributes page to make it easy to share your memories.

It is with profound sadness that the family of Thomas (Tom or...

Send flowers to the Stull family.