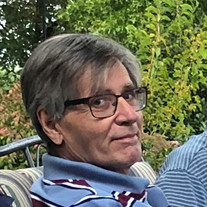 Charles "Chuck" Yohe, 66, of Wickliffe, passed away on March 15, 2022. Chuck is survived by his mother, Charlene A. Yohe; sister, Lynne A. Hoopingarner; and, brother and sister-in-law, David and Donna Yohe. He is the beloved uncle of David (Kenda) Yohe II; Diana (Joseph) Parr; and Kevin P. Hoopingarner. Recently, Chuck became a great-uncle to David E. Yohe III. Chuck was predeceased by his father, Charles L. Yohe and brother-in-law, Kevin J. Hoopingarner. Though he struggled with many health issues, Chuck was a caring, gentle, thoughtful and considerate man. He never spoke an unkind word and was a model of perseverance. Chuck was interested in everything around him; he loved music, trivia, sports (especially OSU Football), dogs, and most especially, golfing. Chuck's favorite golf achievement was his hole-in-one on the 15th hole at Henry Stambaugh Golf Course. Chuck was passionate about supporting the deaf community. He attained his goal to graduate with his Associate's Degree in American Sign Language on March 10, 2022. The personnel at LCC, especially Professor Jeanette Brossmann, gave him a most wonderful and personal graduation ceremony at Wickliffe Country Place. He had an outstanding community of support in the members of his second family at LCC, for whom his first family will be forever grateful. Friends will be received on Saturday, March 19, 2022 at 11:00 a.m. at OLMC Church, 29850 Euclid Ave, Wickliffe, OH 44092, followed by a Mass of Christian Burial at noon celebrated by Fr. Joseph O'Donnell. Burial at All Souls Cemetery will occur at a later date. In lieu of flowers, the family asks that you send donations, in Chuck's memory, to The Lakeland Foundation, 7700 Clocktower Drive, Kirtland, Ohio 44094 or at www.lakelandcc.edu/web/about/foundation-departments go to the right margin and click "give now" and locate Chuck's name. All contributions will benefit the American Sign Language Department.

Charles "Chuck" Yohe, 66, of Wickliffe, passed away on March 15, 2022. Chuck is survived by his mother, Charlene A. Yohe; sister, Lynne A. Hoopingarner; and, brother and sister-in-law, David and Donna Yohe. He is the beloved uncle of David (Kenda)... View Obituary & Service Information

The family of Charles V. Yohe created this Life Tributes page to make it easy to share your memories.

Charles &quot;Chuck&quot; Yohe, 66, of Wickliffe, passed away on March...

Send flowers to the Yohe family.