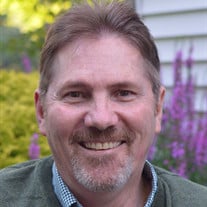 John D. Trimbath - beloved father, husband, papa, brother, friend and fierce advocate for the Physician Assistant (PA) profession - passed away November 8, 2021, at age 71. John is survived by his wife of 29 years, the love of his life, Diane Ullemeyer-Trimbath; his children, Erin (husband Tim) and Ryan (wife Carly); and his four grandchildren, Phoebe, Finn, Mira and Reid; siblings Tria O'Mallie (husband George), Kristina Thompson, Margaret Tiktin (husband Roger); Sandra Kotris (husband Fran) and Charles O'Malley (wife Salve). He was preceded in death by his sister Charlene Ultican and parents Charles Robert Trimbath and Eleanor and Andrew O'Malley. Even the thickest newspaper couldn't adequately capture the legend of John Dennis Trimbath - from the tall tales of his youth slinging hot dogs at Municipal Stadium and roaming Cleveland's Near West Side, his expeditions as a mechanic in the U.S. Air Force during the war in Vietnam and his extensive cross-country travels for his professional advocacy and family adventures with Diane and his children. Books could be written about his 40-plus-year career as a Physician Assistant - much of it at Euclid Hospital - that, in many ways, helped define what it means to be a PA today. In 2004, John was the first non-physician to receive the Distinguished Alumni Award from his alma mater, the George Washington School of Medicine and Health Sciences. His leadership continues to inspire at the Ohio Association of Physician Assistants and the American Academy of Physician Assistants. A true renaissance man, John was a skier, mountain biker and amateur pilot - if it involved a thrill, John was there. Over the years, his smile and wit graced community theater stages and his competitive edge hovered over poker tables from coast to coast (sometimes virtually, with no real money at stake, on his Oculus Quest). Even after a devastating injury left him quadriplegic, John never wavered in his love for his family, profession and travel. He remained active on a state and national level, taught aspiring PA students and loved every minute of service as a Psychiatric Physician Assistant focused on mental health at Crossroads Health in Lake County. His adventures with Diane, his friends and his family continued - from the coasts of Greece to the shores of the Outer Banks. John made every day count. He treasured nothing more than time with his family - date nights with Diane, backyard talks with Erin, Browns games with his sons and Sunday shenanigans with his grandchildren. A celebration in honor of John's life will be held at a later date. In lieu of flowers, the family suggests memorial donations to the Paralyzed Veterans of America (pva.org/donate) or one of the funds at the Ohio Association of Physician Assistants (ohiopa.com). Here is the link for the family to share in order to view the Trimbath Service at 5 pm. Topic: John Trimbath Service Time: Nov 14, 2021 04:45 PM Eastern Time (US and Canada) Join Zoom Meeting https://us02web.zoom.us/j/6208672049?pwd=aWJveG16azZ5bFBWUDRkaCtNL3hBQT09 Meeting ID: 620 867 2049 Passcode: Monreal

The family of John Dennis Trimbath created this Life Tributes page to make it easy to share your memories.

Send flowers to the Trimbath family.