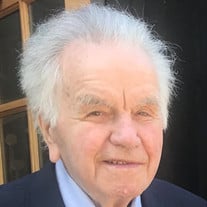 Harry Harichovszky, age 92, passed away peacefully, surrounded by his family, on September 6, 2020, at his home in Mentor. Born in Budapest, Hungary, to the late Joseph Harichovszky and Katharina Sipocz (nee Lechner), on August 6, 1928, he arrived in the U.S.A. in 1957, after escaping Hungary during the Hungarian Revolution of 1956, and came to Northeast Ohio shortly thereafter, and resided in Mentor for 54 years. Harry was a proud and loving husband, father, and grandfather who will be greatly missed. He retired from Combustion Engineering Tyler as a lab technician, following many years as an auto mechanic, tailor, chauffer. Harry was truly a master of many trades and could fix just about anything. He lived life to the fullest with a sense of adventure, zest and passion, and didn’t do anything halfway. He was a USSA Certified Ski Instructor, skied at countless ski areas and mountains all over the world, and skied until the age of 85. He loved boating and waterskiing, and even learned to windsurf in his 60s. Flying was one of his greatest passions, and he flew gliders and private single-engine planes, logging nearly 4000 hours in flight. He adored music and dancing with his beloved Agnes, his dance and life partner of nearly 70 years. He was a prolific photographer & videographer, and would rarely be seen without a camera or video-camera in his hands. Harry loved all animals, and had many beloved doggie companions he adored over his lifetime. Harry is survived by his wife of 67 years, Agnes Harichovszky (nee Trebitsch), daughter Harriet (Tom) Holleran, grandchildren Kathryn and Michael and nieces in Austria, Claudia and Henrietta. He is preceded in death by his parents, Joseph and Katharina, and sister, Katharina Katzensteiner. The family wishes to express their sincere gratitude to the Hospice of the Western Reserve, with special thanks to John, Caley, Jamie, and Jeremiah, and all the staff of HWR, for the kind, compassionate care they provided to Harry for nearly a year, and request donations be made online at hospicewr.org/tribute or mailed to Hospice of the Western Reserve, PO Box 72101, Cleveland, Ohio 44197-9935 should friends wish to support this wonderful organization in Harry’s memory. A visitation or funeral service will not be held at this time, but a remembrance celebration will be planned for a later date. Arrangements are entrusted to Monreal Srnick Funeral Home. To leave condolences for the family, visit: Monreal.com

Harry Harichovszky, age 92, passed away peacefully, surrounded by his family, on September 6, 2020, at his home in Mentor. Born in Budapest, Hungary, to the late Joseph Harichovszky and Katharina Sipocz (nee Lechner), on August 6, 1928, he arrived... View Obituary & Service Information

The family of Joseph Harry Harichovszky created this Life Tributes page to make it easy to share your memories.

Send flowers to the Harichovszky family.