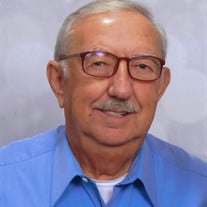 Joso Cindric, age 81, of Willowick, passed away peacefully, surrounded by his family as he entered the Kingdom of Heaven on February 24, 2020. He was born in Smrekovac, Bosnia - Herzegovina on March 18, 1938, to the late Joso and Kata Cindric. He was a proud and loving husband, father, grandfather, great-grandfather, brother and uncle who will be greatly missed by all who knew and loved him. Joso immigrated in September of 1969 to the United States and settled in Cleveland and moved to Willowick in 1976 where he raised his family. Joso proudly worked as a sheet metal mechanic until 2002, and as a Bailiff for Willoughby Municipal Court until retirement in 2014. He was a man of faith and a proud member of St. Paul Croatian Church. He was also a member of the American Croatian Lodge Cardinal Stepinac. His greatest joy and source of pride was his family. He especially enjoyed the time he shared with his grandchildren and great-grandchildren. Joso is survived by his loving and devoted wife of 63 years, Marija, children Jelena (Tomo) Obrovac, Nick (Ann) Cindric, grandchildren Robert (Gretchen) Obrovac, Kristina (Christopher) Mata, Joseph (Iva) Cindric and Kevin (Rachel) Cindric, great-grandchildren Nolan, Kyle, Caiden, Mila, Niko, Evelyn and a host of nieces and nephews. He was preceded in death by his infant daughter Mirjana, siblings Tomo, Ivan, Matija, Pave, Nikola, Jure, Marija Jurcevic, Bara Samardzija and Dragica Neralic. Visitation will be on Thursday, February 27, 2020 from 4pm to 8pm at the Monreal Funeral Home, 35400 Curtis Blvd., Eastlake. A Funeral Mass will be held on Friday, February 28, 2020 at 10am at St. Paul Croatian Church, 1369 East 40th Street, Cleveland (Please Meet at Church). Interment All Souls Cemetery in Chardon.

Joso Cindric, age 81, of Willowick, passed away peacefully, surrounded by his family as he entered the Kingdom of Heaven on February 24, 2020. He was born in Smrekovac, Bosnia - Herzegovina on March 18, 1938, to the late Joso and Kata Cindric. He... View Obituary & Service Information

The family of Joso Cindric created this Life Tributes page to make it easy to share your memories.

Send flowers to the Cindric family.