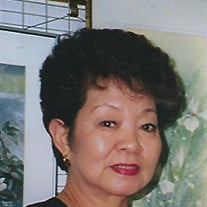 Funeral Mass for Kumiko “Kay” Ruth (Kiyonari) Negrelli, age 90, of Mentor, will be 9:30am, Saturday, December 28, 2019, at St. John Vianney Church, 7575 Bellflower Road, Mentor. She peacefully passed away on Thursday, December 19, 2019. She was born July 31, 1929, in Tokyo, Japan. At the age of 13 she moved with her family to Beppu, Kyushu. After the war she was employed by the occupation forces as a cook and household manager for dependent families. It was in Beppu that she met her husband SFC Joseph Negrelli. They were married August 28, 1951, at the army base chapel after his completion of combat tour in Korea. Upon his military discharge, Kay and Joseph then returned to the States where they lived with his parents in Mayfield Heights. Kay spent the next 60+ years as a resident of Lake County residing in Eastlake, Willowick, and Mentor. She was a homemaker and devoted mother to her four children. She was very active in the Japanese War Brides Clubs of Cleveland and Lake County and the Japanese-American Citizens League (JACL). In her later years she enjoyed being a member of the Cleveland Area Retired Persons (CARP). Kay enjoyed crafting, knitting, and crocheting; but her expertise was as a seamstress. Throughout the years she operated her own alterations/dressmaking business. She made the first cheerleading uniforms for Lake Catholic High School. She took her knowledge of sewing to the retail world working for JoAnn Fabrics for a number of years. Kay enjoyed hosting parties for her friends, especially New Year’s Eve parties. Kay is survived by her loving husband of 68 years, Joseph P. Negrelli, her loving sons, David J. (Liliam) and Edward P. (Maureen), her daughters, Margaret “Peggy” (Paul) Sklad and Kathryn K., her grandchildren, Michael Sklad, Erica (Kenny) Haber, Christina (Joel) Rodriguez, Maureen “Nickie” (Clayton) Coomer, Kara (Robert) Boyle, Joseph B. Negrelli and Tracey (Alex) Harris, her 8 great-grandchildren, her in-laws, William (Virginia) Negrelli and Audrey Negrelli, her many nieces and nephews, and her family in Japan. She was preceded in death by her parents and sister in Japan; her parents-in-law, Joseph and Marguerite (Smyth) Negrelli, and her brother-in-law, Thomas J. Negrelli. Family and friends, please meet at St. John Vianney for a funeral mass at 9:30am Saturday morning, December 28, 2019 at 7575 Bellflower Rd in Mentor, Ohio. Burial to immediately follow at Knollwood cemetery, 1678 Som Center Road, Mayfield Hts, OH In lieu of flowers, family requests contributions to a charity of your choice in Kay’s memory. Arrangements by Monreal Srnick Funeral Home

The family of Kay R Negrelli created this Life Tributes page to make it easy to share your memories.