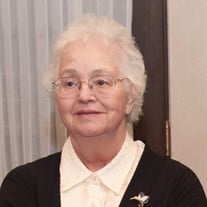 Loretta May (Bingham) Yager, 81, of Mentor, Ohio passed away peacefully in her sleep on July 16, 2019. She was a beloved wife, mother, grandmother, great-grandmother, sister and aunt. Her passing will be felt deeply by family and friends alike. She was born, May 18, 1938 in Rome, New York, the 5th daughter & child of Russell and Mable (Simmons) Bingham. Loretta graduated from Rome Free Academy in 1956 were she played the French Horn as a member of the marching band. She met the late Leonard E Yager Jr. while attending Rome Free Academy and they married in 1958. Her primary focus was always her family. She was actively involved with her children’s education whether it was being a room parent or attending a sporting event for her children which she never missed. Her home and kitchen became the gathering place of many teens where she was simply “Mom” to them. Nothing about these gathering bothered her including flour accidently being thrown in her face at a pizza party. As one of her nieces said,” Aunt Loretta gave the best hugs. You could feel her love for you through them.” Always involved with her children’s activities, she also found the time to help the elderly in the community by cooking for Meals on Wheels. Her love of family also included her parents, sisters, brothers, nieces and nephews. She would drive her in-laws to Florida in the fall and back north in the spring. She had a passion for sewing and knitting as was evident by the Barbie doll clothes, she made for her daughter and granddaughters. Additionally, Loretta’s special skills and talents allowed her opportunities to create beautiful wedding dresses for her daughter and nieces. It was not unusual to hear her humming and singing while sewing. The family spent vacations traveling and camping across most of the continental United States. She loved the sight and smell of the ocean, creating ceramics and watching humming birds at the feeders from her kitchen table. Loretta’s strong Christian belief was exuded through her deeds and the way she lived. She left no doubt that Christ was present in every aspect of her life. Nothing could dim her spirit, not even her battle with ovarian cancer. Loretta’s devotion for her husband, Leonard, never wavered even after he suffered a major stroke and Parkinson’s. She never missed a meal with him at the nursing home all while she silently battled the effects of Dementia. Loretta is survived by her three children, Lynnette J. Yager-Barbano of Baltimore, Maryland, Leonard E. (Melinda) Yager III of Albuquerque, New Mexico and Leslie R. (Cyndia) Yager of Eastlake, Ohio; beloved grandchildren Kristy (Kris) McCoy, Jennifer (Jason) Dassinger, Blake (Becca) Kinsey, William (Meghan) Yager, Rebecca (Brandon) Cooper and Carissa Yager; great-grandchildren Kayna Skeen, Aubree Dassinger, Lilyana Dassinger, Bradley Dassinger, James Kinsey and Wyatt Kinsey; siblings Gloria Hughes, June (Dean) Austin, Joy Bingham and Russell (Linda) Bingham; brother/sisters-in-law Birdie Yager, Lillian Peck , Richard (Patricia) Yager, Vern Elmer and Doug Jones. She was preceded in death by her loving and devoted husband of almost 53 years, Leonard E. Yager Jr.; parents Russell and Mable Bingham; granddaughter, Amanda Dawn Yager; her sisters Barbara Leszczynski, Nancy Jones and Sheila Elmer; Brother/sister-in-law Dexter Yager and Ella Jane (Yager) Bovincino. Visiting hours will be on Friday July 26, 2019 from 5 to 8 pm at Monreal Funeral Home; 35400 Curtis Blvd; Eastlake, Ohio 44095. Funeral services will be at Monreal Funeral Home on Saturday July 27, 2019 at 10 am with burial to follow at Concord Township Cemetery; Concord Hambden Road; Concord, Ohio 44077.

Loretta May (Bingham) Yager, 81, of Mentor, Ohio passed away peacefully in her sleep on July 16, 2019. She was a beloved wife, mother, grandmother, great-grandmother, sister and aunt. Her passing will be felt deeply by family and friends alike. She... View Obituary & Service Information

The family of Loretta B. Yager created this Life Tributes page to make it easy to share your memories.

Send flowers to the Yager family.