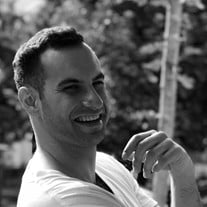 Nicholas “Miklos” Adam Battaglia, 30 years old, beloved son, brother, and friend passed away unexpectedly on Monday, November 11th, 2019 in Columbus, Ohio. His family and the love with which he was raised served as a foundation to the intelligent and empathetic man he would become. Nick is survived by his loving parents, Erika Battaglia (Bill Fenoglio) and Paul Battaglia (Leigh Ann Miller), his brother AJ Battaglia, his sister Alana Battaglia, his grandparents, Eva “Mama” Magyari and Ernest “Pops” (Sharon Soderman) Magyari, his aunts and uncles, Janis Liberatore, Joan (Ted) Lichko, Susan (Greg) Bulone and Diane “DeeDee” Smith, his cousins, Megan (Richie) Bendis, Matthew Lichko, Courtney (Drew) Rands and many more cousins. Nick was preceded in death by his grandparents Angelo and Henrietta Battaglia, his cousin, Brian Lichko and his uncle, David Smith. An Ohio University graduate and proud Columbus resident, Nick’s legacy of love and laughter lives on within the people lucky enough to have known him. His uncanny ability to communicate and bond with anyone he met led to his life’s biggest accomplishment, an endless circle of close friends—thousands of relationships he nurtured with people that he deeply cared for. He naturally brought people together, thriving on connectivity and community. His quick wit, emotive smile, genuine warmth, and non-stop sense of humor will be missed by many. He was also known for his knowledge of and passion for international soccer as well as his dedication to music and its impact on the spirit. He poured his heart into the curation of music catalogs for every mood and situation, capturing a moment of time with each collection. He loved nothing more than to dance with his best friends—whom he lovingly called his forms. Nick’s keen ear and good taste can lay claim to countless dancefloor memories. “When a person dies he only appears to die. He is still very much alive in the past, so it is very silly for people to cry at his funeral—so it goes." Inurnment will be Monday, November 18, 2019, 10:30am at All Souls Cemetery. Everyone please meet at the cemetery. Funeral service will be 5pm on Sunday, November 17, 2019 at Monreal Funeral Home, 35400 Curtis Blvd., Eastlake Ohio 44095. Nick’s visitation will be 2-5pm on Sunday, November 17, 2019 at Monreal Funeral Home, 35400 Curtis Blvd., Eastlake. Family and friends are invited to support Nick’s passion project, a start-up charity organization he was working to launch in Columbus which will now be named in his honor. Visit to learn more and donate online. https://www.gofundme.com/f/nick-battaglias-memorial-soupfest-fund

Nicholas &#8220;Miklos&#8221; Adam Battaglia, 30 years old, beloved son, brother, and friend passed away unexpectedly on Monday, November 11th, 2019 in Columbus, Ohio. His family and the love with which he was raised served as a foundation to... View Obituary & Service Information

The family of Nicholas Adam Battaglia created this Life Tributes page to make it easy to share your memories.

Send flowers to the Battaglia family.