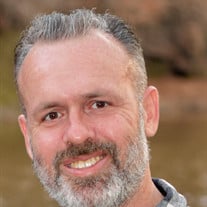 Rob Hytree, age 43, of Painesville, passed away May 12, 2021. He was born in Willoughby, OH on December 14, 1977. Rob was a selfless and devoted husband, father, son, brother, uncle, cousin, and friend. He took immense pride in his family and worked diligently and sacrificially to provide for and support their dreams. He was employed at Lincoln Electric where he was well-loved and respected. Rob loved God and worked out his faith in Christ humbly by serving and loving his fellow man, and by serving as a trustee at Calvary Fellowship Baptist Church. He enjoyed playing pinball as he was active in various leagues/tournaments and forged many meaningful friendships along the way. Rob was generous and kind in a rare and authentic way. Our world is a better place because he was a part of it. Rob and Ang spent 22 years building their lives together. He is survived by his wife, Angela Hytree (nee Sloan), son Turner Hytree, daughter Riley Hytree, mother Elizabeth Jones (Harry), father Robert Hytree (Denise), brother Kevin Hytree (Kimberly), step-brothers David Advey (Rachel), Craig Jones, Keith Jones, step-sister Kari Medved (Ive), maternal grandparents Edward and Dorothy Feldkamp, his parents-in-law Brett Sloan (Patty), Lynn Parsons (Tim), grandmother-in-law June Sloan, brothers-in-law David Nofziger (Stacy), Jason Sloan (Paula), Ben Parsons, and Nate Parsons, and countless aunts, uncles, cousins, and dear friends. He was preceded in death by his paternal grandparents Edward and Frances Hytree, and foster daughter Brittany Sergent. Visitation will be on Thursday, May 20, 2021from 4 to 8pm at Monreal Srnick Funeral Home, 35400 Curtis Blvd., Eastlake. A Funeral Service will be held on Friday, May 21, 2021 at 10am also at the funeral home. There will be a celebration of life luncheon following Friday's service at Calvary Fellowship Baptist Church, 727 Mentor Avenue, Painesville.

Rob Hytree, age 43, of Painesville, passed away May 12, 2021. He was born in Willoughby, OH on December 14, 1977. Rob was a selfless and devoted husband, father, son, brother, uncle, cousin, and friend. He took immense pride in his family and... View Obituary & Service Information

The family of Rob Hytree created this Life Tributes page to make it easy to share your memories.

Send flowers to the Hytree family.