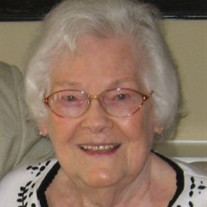 Shirley Mae Nurmi, age 94, passed away peacefully on November 2, 2019. She was born December 5, 1924, in Sioux City, Iowa to Leo and Mabel Danner. She married Leo Olavi Nurmi on September 25, 1944, who preceded her in death in 2014. Shirley is survived by her four children and their spouses Linda N (James) Treeger, Eric Nurmi (Clinton Bailey), Sandra Zubek, and Shirleen N (James) Laubenthal; six grandchildren Scott and Todd Treeger, Brett and Lisa Zubek, and Connor and Sean Laubenthal; ten great grandchildren; and two great-great grandchildren. Shirley was a resident and active member of the community of Euclid, Ohio for 66 years. She was dedicated to improving education for the children of the city of Euclid and the State of Ohio through her tireless work with Parent Teacher Associations (PTA), as an elected official of the Euclid School Board, and a member of the Ohio School Board Association (OSBA). She was an expert knitter and quilter coveting several awards for her work as well as a local business owner of Shirl’s Knit-n-Quilt. Please join us to celebrate her life on Sunday, November 24, 2019 between 10 am and 12pm at Monreal Funeral Home, 35400 Curits Blvd., Eastlake, Ohio 44095 followed by a luncheon. In lieu of flowers, donations can be made to the American Diabetes Association, Euclid Schools Foundation, or Ohio PTA Memorial Scholarship Program in her honor.

The family of Shirley M. Nurmi created this Life Tributes page to make it easy to share your memories.

Send flowers to the Nurmi family.