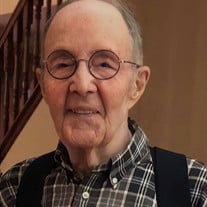 Thomas M. Bunch, age 85, of Anderson, IN formerly of Eastlake, OH, passed away peacefully on January 25, 2021, after a courageous battle with multiple myeloma. He was born in Cleveland, on February 14, 1935, to the late Lucien McReynolds Bunch and Jessie Dulzer Bunch. He was a proud and loving husband, father, and grandfather, who will be greatly missed by all who knew him.Thomas is survived by his wife Candance Bunch, children Ann Marie Bunch, Joseph Bunch and Karen (Ray) Hoon, grandchildren Austin Hoon, Nicolette Hoon, Raymond Hoon, and Autumn Hoon. He was the dear brother of Nancy Bunch Sheridan (Jack, deceased) and Bruce Bunch. He was preceded in death by his first wife of 56 years, Betty Norman Bunch and his son Mark Bunch. Following graduation from Cleveland Heights High School in 1953, he attended John Carroll University and then entered the U.S.Coast Guard for 4 years, attending their academy in Groton, Connecticut and then serving in the Philippines during the Korean War. He married Betty Marie in West Allis, WI in November, 1956. Following a career in electronics at Allis-Chalmers in Wisconsin and RCA Corp. in New Jersey and Cleveland, he worked for 17 years with Carl Zeiss Corp. of Germany in electron microscopy, retiring in 1997. Visitation will be on Sunday, January 31, 2021 from 1 to 4pm at Monreal Srnick Funeral Home, 35400 Curtis Blvd., Eastlake, OH, 44095. A Mass of Christian Burial will be held on Monday, February 1, 2021 at 10 am at St. Justin Martyr Church, 35781 Stevens Blvd, Eastlake, OH, 44095. Burial will follow in All Souls Cemetery. Flowers are welcome or consider a contribution in memory of Thomas M. Bunch to the Cleveland Clinic online or sent to: Cleveland Clinic Foundation P.O. Box 931517, Cleveland Ohio 44193-1655.

Thomas M. Bunch, age 85, of Anderson, IN formerly of Eastlake, OH, passed away peacefully on January 25, 2021, after a courageous battle with multiple myeloma. He was born in Cleveland, on February 14, 1935, to the late Lucien McReynolds Bunch... View Obituary & Service Information

The family of Thomas M. Bunch created this Life Tributes page to make it easy to share your memories.

Send flowers to the Bunch family.